Made from Syrah, Cabernet Sauvignon, Merlot and the outstanding Tintilla de Rota, a recovered local variety, this wine is fermented in stainless steel tanks and rests in French oak barrels for 5 months.

Very bright and deep cherry colour with purple reflections and an explosion of aromas, black berries, jammy fruit, spicy, with a creamy touch, chocolate, toffee, liquorice and some toasted aromas. Subtle herbal and mineral aromas. Very tasty in the palate with  notes of fruit and creamy feeling with nice balsamic and toasted aromas in the background. Good and long finish, very pleasant and tasty. 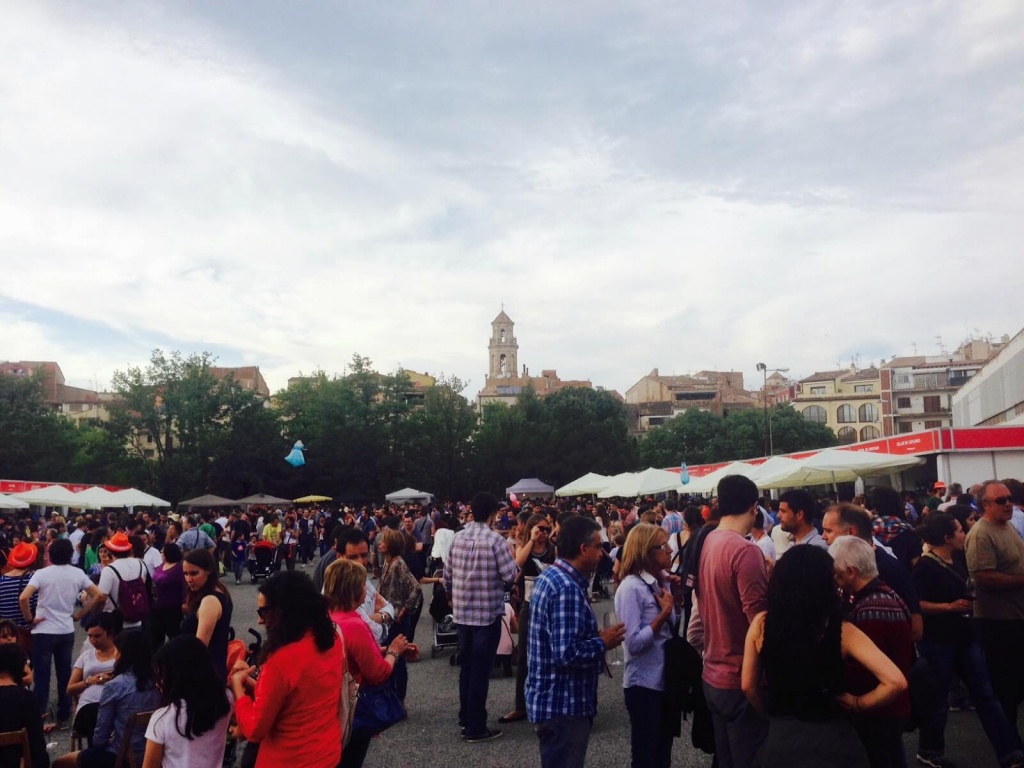 Conclusion: A classic Rioja Reserva: full body, creamy and buttery, and a subtle oak after taste. Supervalu special for €12 (from €15,99, they say).

The day after: Viña Arnáiz Roble, DO Ribera Del Duero 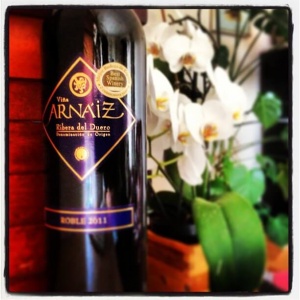 I love to host people at home, it’s such a pleasure! Last night we had a friends couple for bruschettas – or something like that! Basically tapas & wine. Who needs more? To match the bruschettas – chopped tomatoes, buffalo’s mozzarella, olive oil, black pepper, and bread – I opened one of the my recent discoveries, Viña Arnáiz Roble 2011, DO Ribera Del Duero. A young crianza red wine made from Tempranillo, Cabernet Sauvignon and Merlot grapes.
A careful treatment is given to strains along the year, from setting the date of the harvest when the grapes have reached optimum maturity in each plot, till proceeds to hand picking the grapes, where plots are manually selected, which of those grapes will be part of the blend of the wine.Once the grapes get at the winery, they are are ground and pass the maceration tank till they achieve the desired balance in the composition of the wine. They then proceed to racking it by gravity without mechanical actuation and  the wine obtained after a first racking, is the malolactic fermentation.This Viña Arnáiz matures in French oak barrels for 4 months, during which is performed three racking to help oxygenate the wine.They recommend to open this Ribera Del Duero Roble at least one hour before drinking it, and to pour it in a decanter – if you can – to better appreciate all its virtues… And so I did. Opened it a good hour before serving, poured it into a decanter and… voilá! The wine was fantastic… BUT, I have to confess, ashamedly, that we didn’t finish the second bottle, and I had to pour it back to the bottle and left it on the refrigerator till the next day.Lunch time – gnocchi à bolognesa. What to drink? The left-over Viña Arnáiz Roble. And guess what? The wine was even better! All the subtle aromas were more accentuated, the velvet sensation from the malolatic, the freshness from the maceration, the red & black fruits, and even a mocha finish!

This is, among others, one of my The Day After Wine”.

This old vines (Ciepas Viejas) of Mencía variety grapes are over 60 years old grown on terraces and slopes of gravel and slate soils. The best grapes are selected by hand, the stems are removed and they are further lightly pressed. The wine is aged in these barrels for 9 months.

Showing a lively cherry colour, it has red berries, vanilla & spices aromas on the nose. Red berries, chocolate and sweet spices on the palate, with a long and smooth finish. 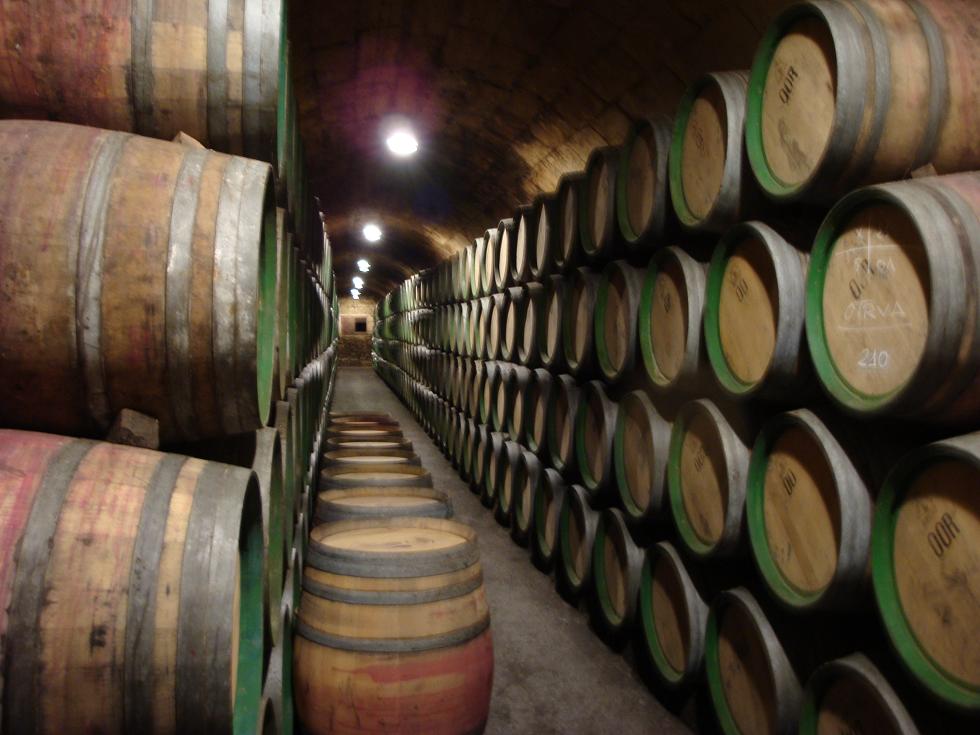 This Lar de Paula 2010 is a fantastic DOC Rioja, 100% Tempranillo, very clear ruby colour, with a clean medium nose, aromas of fruits, spices and liquorice. On the palate the medium acidity balances well with the rounded tannins, with a medium to full body. Quite jammy red berries and fruity, cherries, and a bit of tobacco as well. Medium to long length, making this wine a very good one, with a potential to keep for 3 to 4 more years yet. 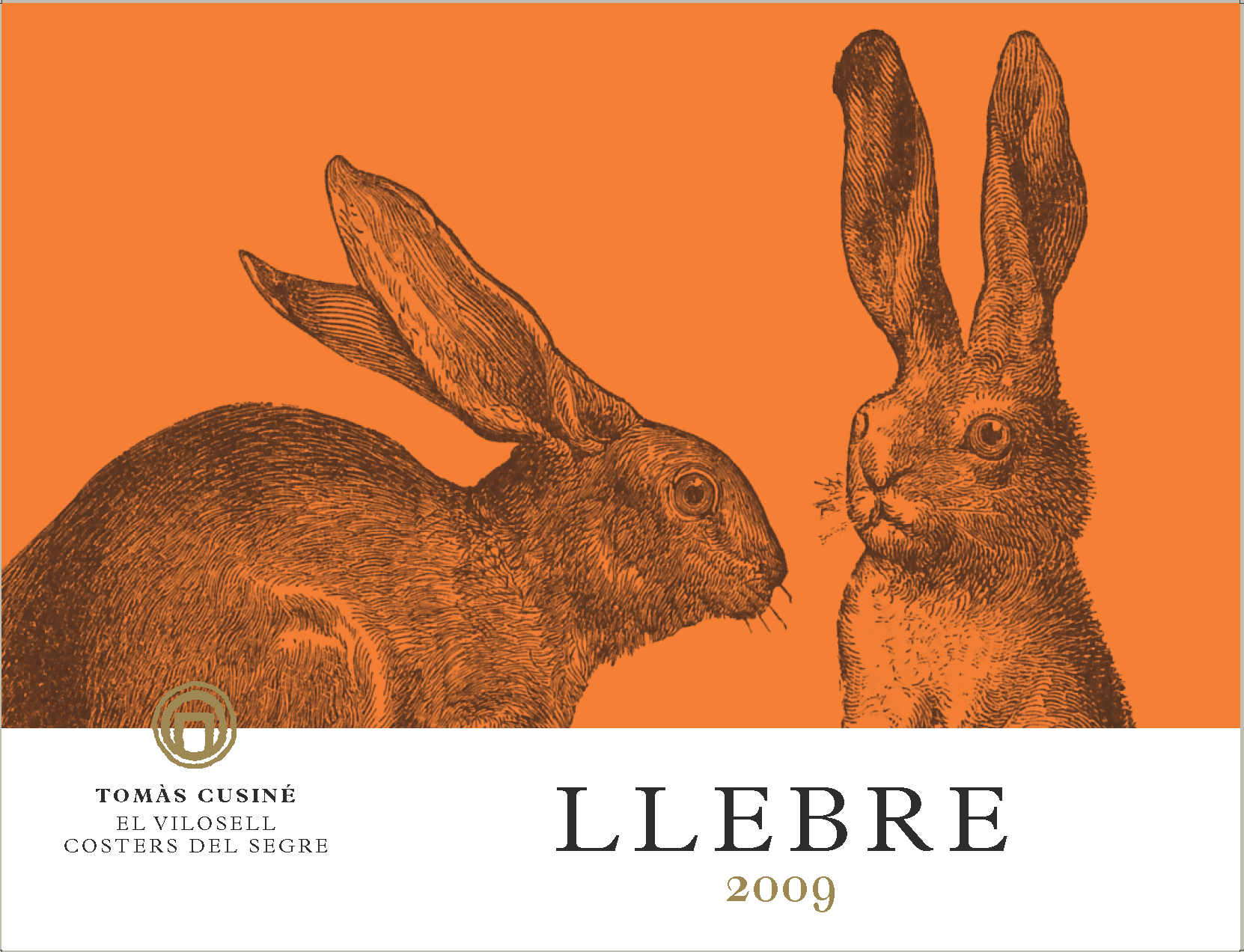 I brought this wine from Spain recently, and offered it to some friends. The feedback was positive… No surprise, as it got a respectable 90 points Parker! So I decided to taste it.

Llebre is produced by Tomás Cusiné, which is located on the northern side of the Sierra de La Llena, part of the Sierra del Montsant. Its vineyards are situated at an altitude between 700 and 740 metres; the soils are limestone and the lands have gravel on the surface with clayey subsoil. Costers Del Sagres is a DO (Denominación de Origen) area.

Llebre 2009 is made from Tempranillo, Merlot, Cabernet Sauvignon, Grenache, Carignan and Syrah grapes, it was aged in French oak for 3 months before bottled, which brings toasty notes to the palate, and subtle oak to the nose.

The nose also is plenty of aromas of red fruits, and in the mouth it’s silky and fresh, with soft tannins and good acidity, plenty of red fruit jam, spices, and a discrete oak.

A wine with character, with excellent value for money, it offers all the fruitiness of Garnacha old vines and transmits all the “terroir”.

In the glass, Nietro wears a cherry color, bright, clean, dense tear but medium-high. The first impact nose tells us that this is a wine with character: it is fresh, clean, Mediterranean, with spicy and black pepper. Attracts. With aeration aromatic drink increases its density, is opening gently, offering sweet notes of ginger, juniper … – Has a touch of Christmas! – Graphite mineral notes and subtle hints about parenting. All very well integrated and essentially and above all, a red fruit (cassis) and fresh.

His entry into greedy mouth, with volume, according to the nose but with a point of warmth. It is powerful, with notes of undergrowth, a gentle presence of tannin structure and maintaining promises a good performance, and a predominantly red fruit. It is soft and creamy. It enjoys.

Nietro leaves a good taste, is long and slightly bitter in the aftertaste, something that should not be associated with unpleasant, simply lengthens its persistence. Alcohol is well integrated and gives us a very good feeling of freshness on your end. To repeat.

Nietro is made ​​from old vines of Grenache, with a mean age of 40 years, grown at 950 meters above ground slate, in the municipalities of Castejón of Alarba, Alarba and Acered. Their name, Nietro, comes from a old unit of measurement equivalent to 16 wine jugs or 160 liters.